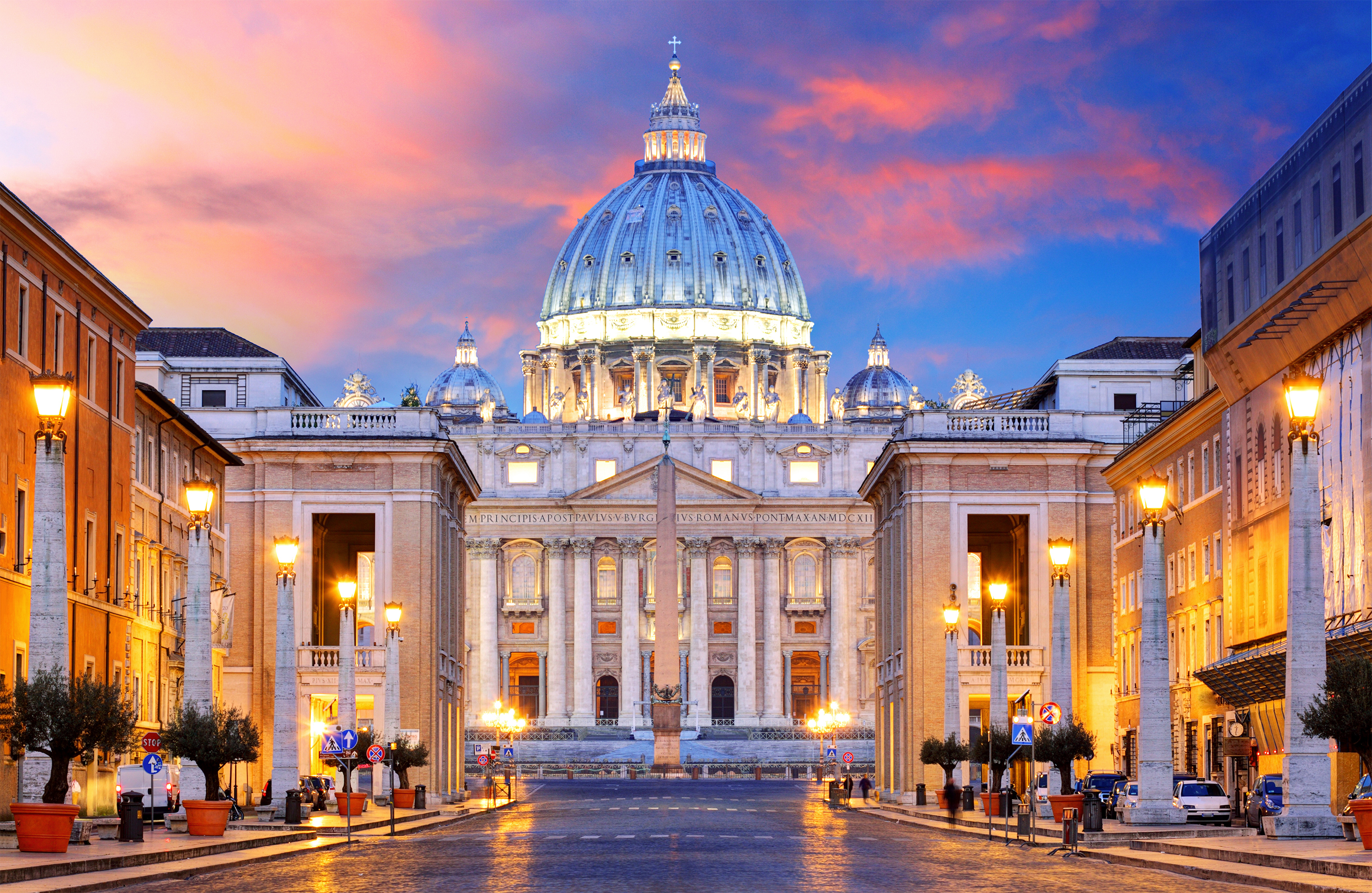 Rome, Italy’s capital, is a sprawling, cosmopolitan city with nearly 3,000 years of globally influential art, architecture and culture on display. Ancient ruins such as the Forum and the Colosseum evoke the power of the former Roman Empire. Vatican City, headquarters of the Roman Catholic Church, has St. Peter’s Basilica and the Vatican Museums, which house masterpieces such as Michelangelo’s Sistine Chapel frescoes.

A heady mix of haunting ruins, awe-inspiring art and vibrant street life, Italy’s hot-blooded capital is one of the World’s most romantic and inspiring cities.

Tivoli is a town and comune in Lazio, central Italy, about 30 kilometres (19 miles) east-north-east of Rome, at the falls of the Aniene river where it issues from the Sabine hills. The city offers a wide view over the Roman Campagna.

During the Renaissance popes and cardinals did not limit their embellishment program to Rome, and erected buildings in Tivoli also. In 1461 Pope Pius II built the massive Rocca Pia to control the always restive population, and as a symbol of the permanence of papal temporal power here.

From the 16th century the city saw further construction of villas. The most famous of these is the Villa d’Este, a World Heritage Site, whose construction was started in 1550 by Pirro Ligorio for Cardinal Ippolito II d’Este and which was richly decorated with an ambitious program of frescos by famous painters. In 1527 Tivoli was sacked by bands of the supporters of the emperor and the Colonna, important archives being destroyed during the attack. In 1547 it was again occupied, by the Duke of Alba in a war against Paul IV, and in 1744 by the Austrians.

In 1835 Pope Gregory XVI added the Villa Gregoriana, a villa complex pivoting around the Aniene’s falls. 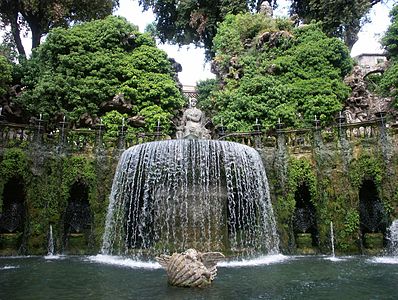 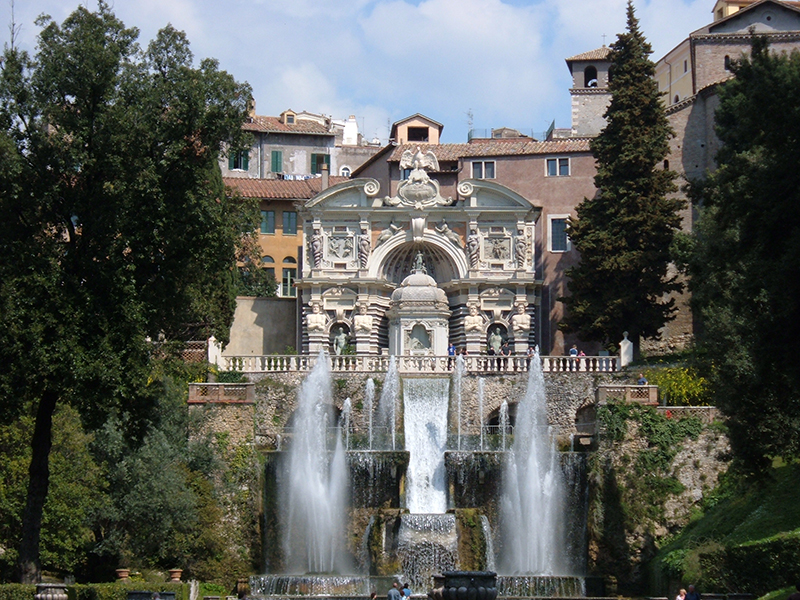 Villa d’Este is part of the UNESCO World Heritage site list since 2001. The fame and glory of the Villa d’Este was above all established by its extraordinary system of fountains; fifty-one fountains and nymphaeum, 398 spouts, 364 water jets, 64 waterfalls, and 220 basins, fed by 875 meters of canals, channels and cascades, and all working entirely by the force of gravity, without pumps.

Pirro Logorio who was responsible for the iconographic programs worked out in the villa’s frescos, was also commissioned to lay out the gardens for the villa, with the assistance of  Tommaso Chiruchi of Bologna, one of the most skilled hydraulic engineers of the sixteenth century; Chiruchi had worked on the fountains at Villa Lante. At Villa d’Este he was assisted in the technical designs for the fountains by a Frenchman, Claude Venard, who was a manufacturer of hydraulic organs. The result was one of the finest gardens of the Renaissance. The garden and water features were admired and imitated over the next two centuries in gardens from Portugal to Saint Petersburg.

The garden plan is laid out on a central axis with subsidiary cross-axes, refreshed by some five hundred jets in fountains, pools and water troughs. The water is supplied by the Aniene, which is partly diverted through the town, a distance of a kilometer, and, originally, by the Rivellese spring, which supplied a cistern under the villa’s courtyard (now supplied by the Aniene too). 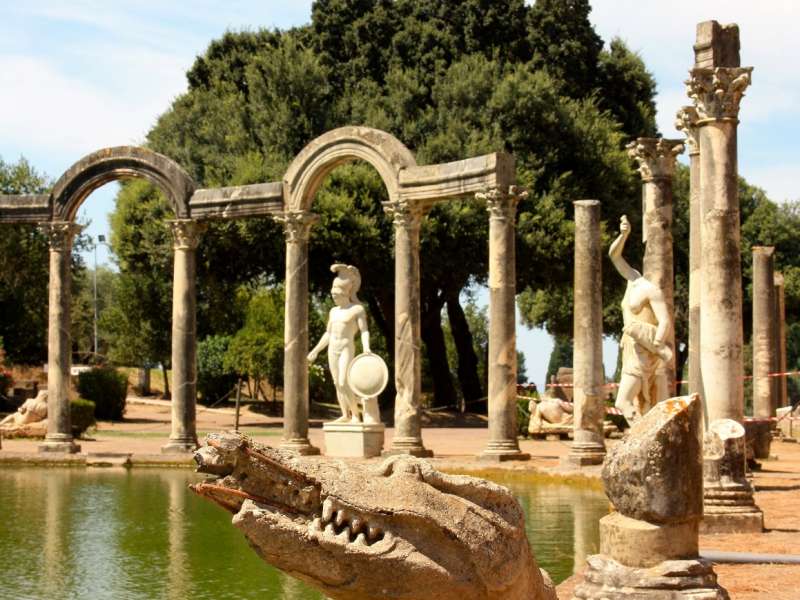 Hadrian’s Villa (Villa Adriana in Italian) is a large Roman archaeological complex at Tivoli, Italy. It is the property of the Republic of Italy,  and has been directed and is part of the UNESCO World Heritage site list from 1999. The villa was constructed at Tibur (modern-day Tivoli) as a retreat from Rome for Roman Emperor Hadrian during the second and third decades of the 2nd century AD. Hadrian is said to have disliked the palace on the Palatine Hill in Rome, leading to the construction of the retreat.

Hadrian’s Villa is a vast area of land with many pools, baths, fountains and classical Greek architecture set in what would have been a mixture of landscaped gardens, wilderness areas and cultivated farmlands.

The buildings are constructed in travertine, brick, lime, pozzolana, and tufa. The complex contains over 30 buildings, covering an area of at least a square kilometer (250 acres) of which much is still unexcavated.

The site was chosen due to its abundant waters and readily available aqueducts that passed through Rome, including Anio Vetus, Anio Nobus, Aqua Marcia, and Aqua Claudia.[2] The area was known as the location of villas before Hadrian obtained the property – it was, and still is, a picturesque area conveniently close to Rome but seemingly detached and separate.

The villa was the greatest Roman example of an Alexandrian garden, recreating a sacred landscape.

Florence, capital of Italy’s Tuscany region, is home to many masterpieces of Renaissance art and architecture. One of its most iconic sights is the Duomo, a cathedral with a terracotta-tiled dome engineered by Brunelleschi and a bell tower by Giotto. The Galleria dell’Accademia displays Michelangelo’s “David” sculpture. The Uffizi Gallery exhibits Botticelli’s “The Birth of Venus” and da Vinci’s “Annunciation.” 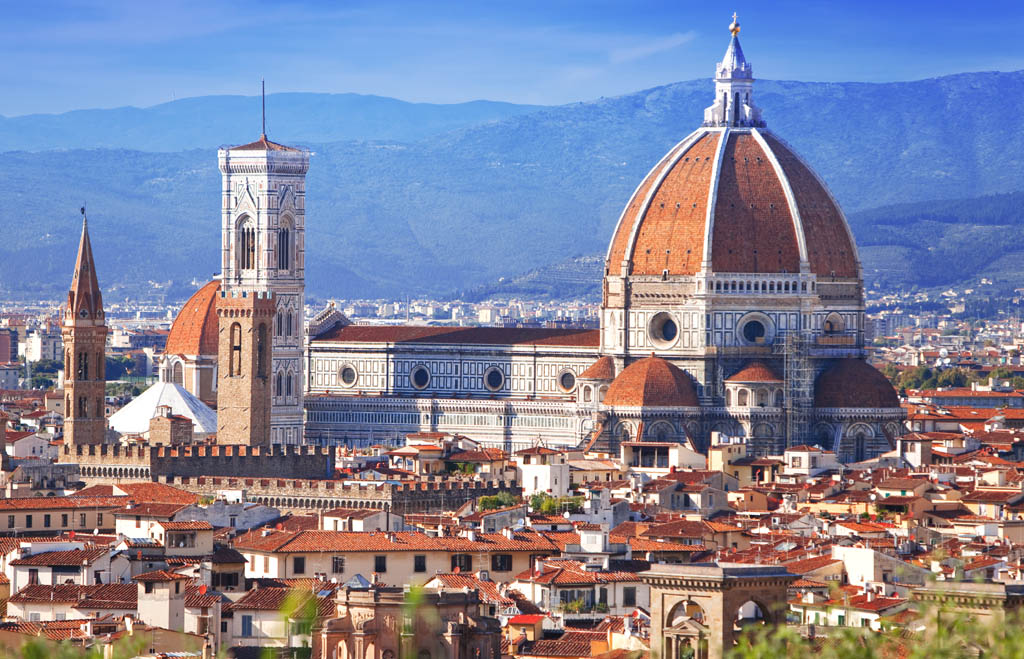